We are sorry, but your browser is unsupported by our Course system. Please use a different browser.

What would happen if you took a 240 VAC outlet and swapped the terminals around? What effects might that have on the machine that’s plugged into it?

That might just sound like an interesting thought question, but it’s an issue that more than one tech here at Appliantology has had to deal with. So let’s pull out a schematic as an example and start drawing some lines!

By the way, the process I’m going to walk you through is something any tech should be able to do: puzzle out how a circuit works just by looking at the schematic. You should also be able to take it a step further, like I’m going to show: reason out how the circuit would run if things were different from what’s shown on the schematic. If you’re not too comfortable with doing either of those things, hopefully this post will give you an idea of how to go about it. 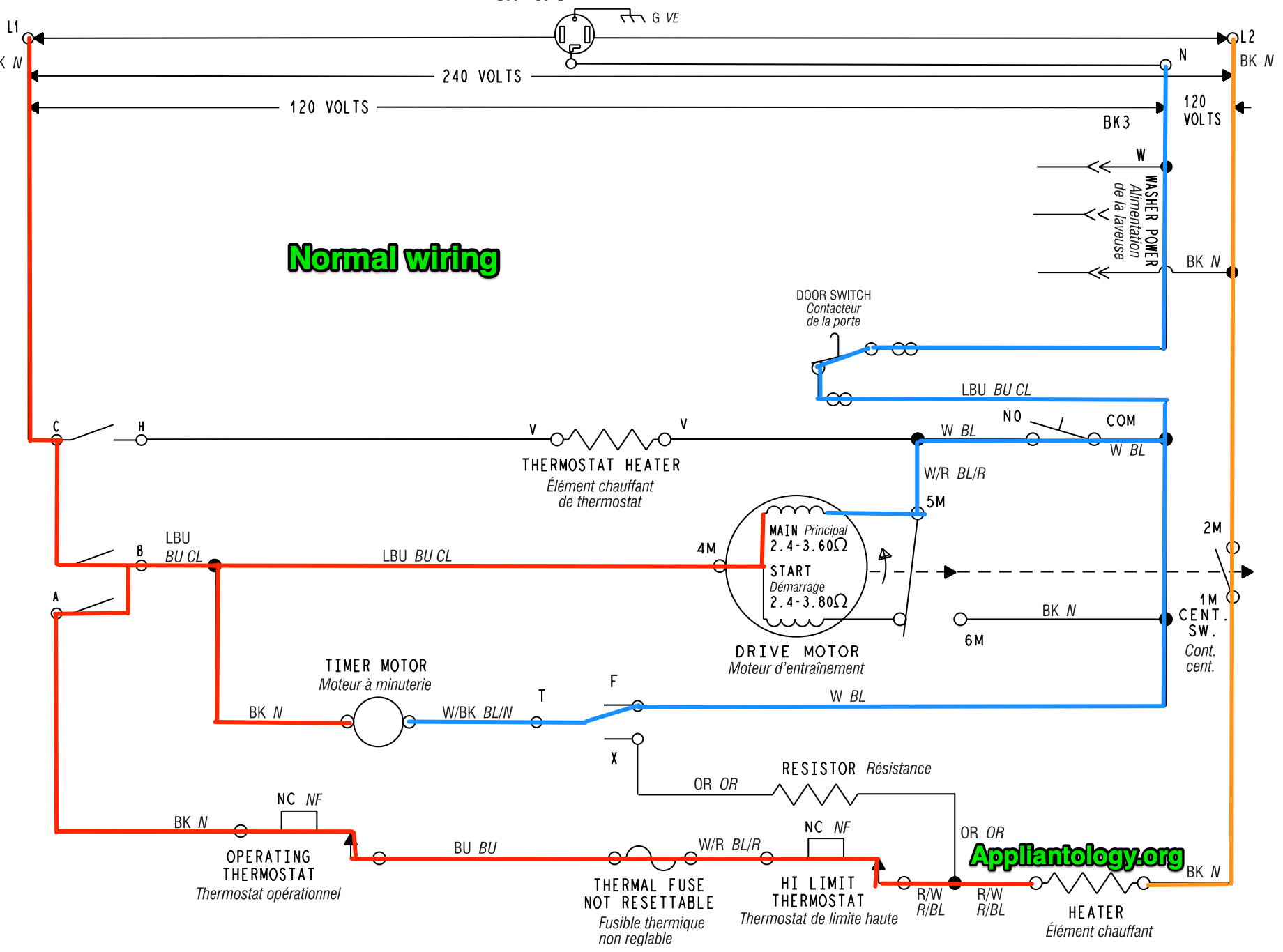 Here’s a standard, old-skool electric dryer, timer motor and all. Just like the caption says, this markup shows how the circuits are supposed to look during a standard timed dry cycle. All I did was choose a color for each input from the power supply (L1, L2, Neutral), and then trace in that color all the way up until I hit a load — informed by my understanding of how these dryer circuits work, of course.

Nothing complicated going on here. Both the drive motor and the timer motor are 120 VAC loads, so they’re getting L1 and Neutral. The heater, on the other hand, is a 240 VAC load, so it’s getting L1 and L2. In fact, the only reason L2 is in this machine is to provide the heater with 240 VAC. The only other load that makes use of L2 is the timer motor during the Auto Dry cycle. When T-X is closed, the timer’s return becomes L2 through a dropping resistor instead of Neutral, and this is because, in Auto Dry, the engineers want the timer to only advance when the heater isn’t running.

All right, let’s get to the fun stuff. What happens if you start flipping around which leg of the power supply goes where?

I’ll get one thing out the way first: it doesn’t change anything if you swap the places of L1 and L2. Interesting things only happen when you swap Neutral with one of the lines. And because of the way the circuit is laid out, it will react differently depending on which line gets swapped with Neutral.

Here’s example #1: we’ve swapped L2 with Neutral. This causes a lot of problems. 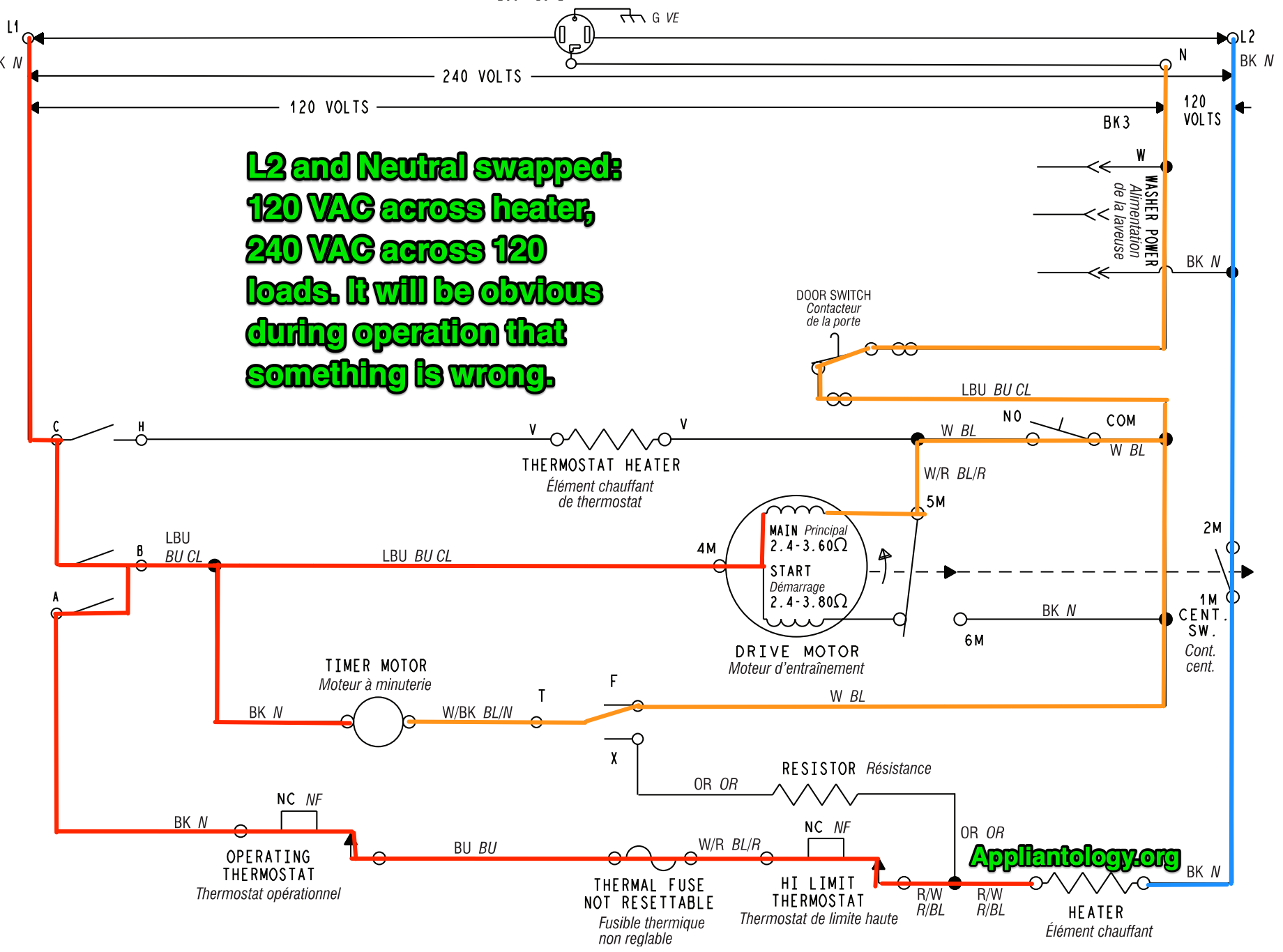 First of all, the heater is only getting 120 VAC when it’s supposed to be getting 240. That means it’s going to run much cooler than it’s supposed to. But the much bigger deal is that you now have 240 VAC across both the timer motor and the drive motor. These loads are now getting twice the voltage they are designed for. If the dryer is run like this, the motor is going to make some awful noise, and more than likely it will burn out after not too long.

In that instance, the failure is going to be very noticeable and potentially catastrophic. But what if we go the other way: swap L1 and Neutral? 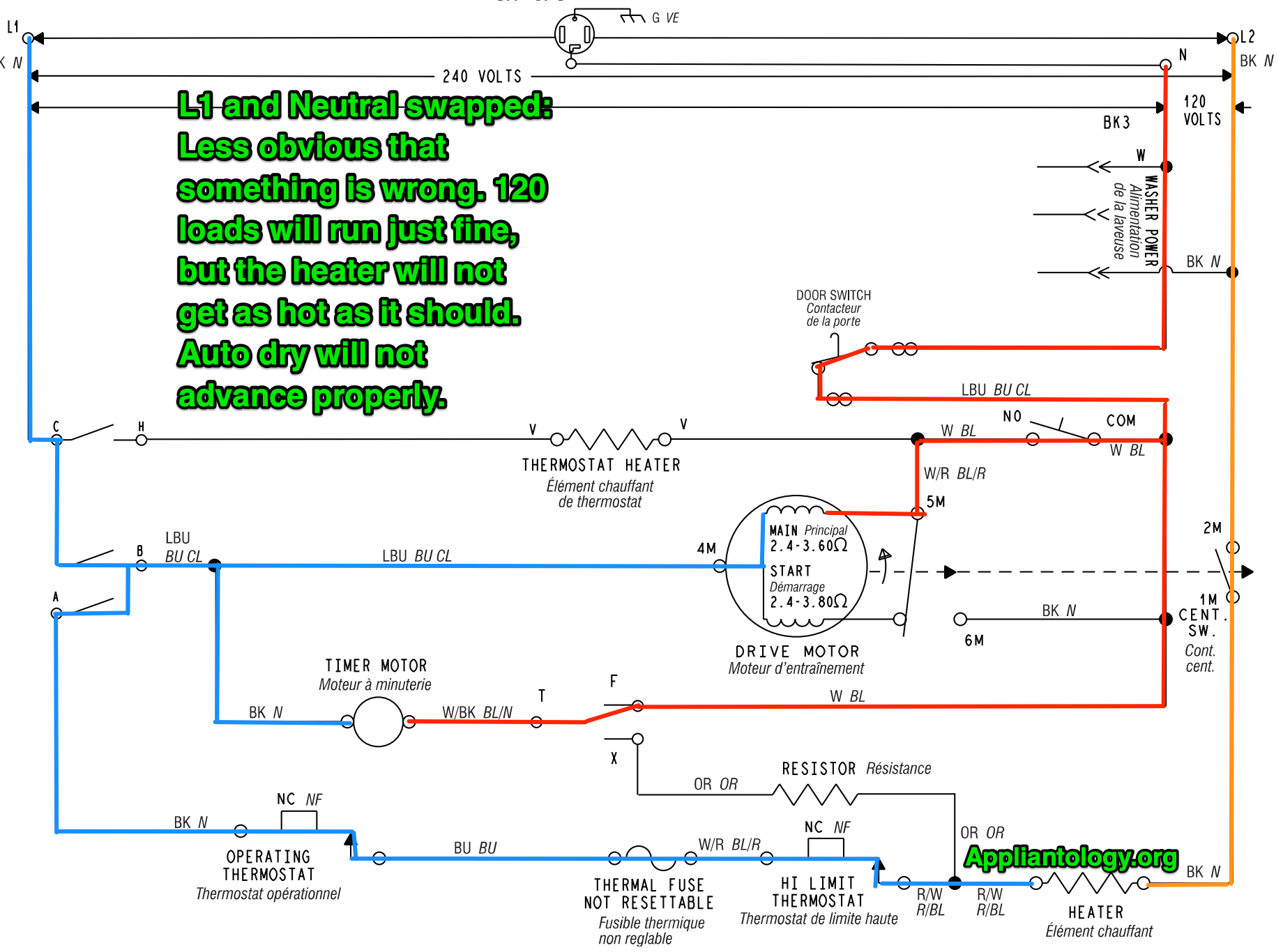 The failure mode this misconfiguration induces is going to be much more subtle. The 120 VAC loads are still getting 120 VAC, so they’re going to run just fine. But similar to the last example, the heater is only getting half its rated voltage, so not much drying is going to happen.

And remember the Auto Dry cycle we mentioned earlier? That’s not going to work right anymore, either. The timer runs on L1 and L2 (240 VAC, but effectively reduced to 120 by the dropping resistor) in Auto Dry, but in this configuration, it’s running on L2 and Neutral. That means the dropping resistor will put that voltage down to a measly 60 volts — nowhere near enough to make the timer advance properly. So not only will the heater not get hot enough in this configuration, but also Auto Dry will not advance.

This kind of wargaming is not theoretical or optional. This is how a real technician should be able to manipulate circuits in his head to figure out problems. And being able to think like this is exactly what we teach here at Master Samurai Tech. Click below to check out the Core Appliance Repair Training course and level up your skills today.

We train the best technicians in the business. Are you ready to become an appliance repair expert? Free Sample Courses > Enroll Today >